Father's Day, Here in the Upside Down

It's Father's Day here in the Upside Down. Or rather the Right-Side-Up. Depending on who you ask, I guess, because it is pretty nuts here.

If you don't know what the Upside Down is, stop reading immediately. Go take your pants off and bingewatch Stranger Things over on the Netflix machine and I'll talk to you in three days. 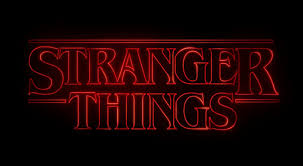 If you're still with me now, you might regret it.

Whenever I have tried to explain my family tree to other people and how I got from point A to point B and enjoyed a fist full of name changes by the time I entered Kindergarten, and how some people are one human but two different kinds of relatives to me, their brains short circuit.

Over the past year or two I realized that my three boys are spaced out the same in age that I was with my older sisters. It's like they're the not-upside-down version of my past life. That is my B.A. life (Before Adoption). They're like the normal version of the dark, cloudy, sticky version of me and my sisters. And if anyone is keeping track, I'd be the ToddlerBandit one, which is creepy because he is the only one who was as obsessed with his belly button as me (#nozippyjammies) and also he was an accident.

Very long story short, there were three of us, and our parents couldn't keep their collective shit together, and yada yada yada, father with a pregnant girlfriend in another state, blah blah blah, "my new wife doesn't like you so go find a place to live", etc., etc., then I got adopted and my sisters did not. If you would like the detailed version, just let me know, but you should probably have a couple drinks first.

Having a father choose a woman over his children was something my Mr. understood, so I've never had to try to explain what a hole that leaves in a kid. Even an adult kid. His situation was a little different, and he grew up with all his sisters. We both enjoyed replacement dads for most of our lives that were just right for us.

Mine died when I was pregnant with ToddlerBandit. I hate that they never got to meet.

This whole couple years I held my breath, waiting. Waiting for a phone call or a knock on the door or a letter. I waited for someone to yank the rug out from under me, to find out about Mr. Fix having a pregnant girlfriend in another state.

For the record, my scheduling him for a vasectomy against his will had nothing to do with this.

And ToddlerBandit turned three and then he turned four and then...nothing. No other woman, no sudden departure, no abandoning his children.

And then just before this weekend, Mr. Fix drove off. Alone. East. One quick goodbye in the hall and he was out the door. And I didn't care.

I didn't care because he is headed to New Jersey to pick up a boat. A replacement for the SS Lee, Mr. Fix found a good deal on the Internets. And he left.

The reason I don't care is because we don't get hung up on Hallmark holidays. And because I know when he gets there he's turning around and coming home. He's doing it because he values family time, and some of our best family times are on the water.

And our kids are unfazed by it. I've told them a dozen times where he is, and two dozen times they've asked, "Where's dad? Did he go for a run? Is he asleep? Is he working today?"

And all the while I'm up his ass to check in every day. But it's not because I'm paranoid he's left us and that my kids will have to grow up without their dad (or, unthinkably, each other). It's for the normal reasons like that he might be dead in a ditch somewhere and I'd like to know which cops to call to report him missing. As of yesterday, I believe that was Illinois.

Posted by DayLeeFix at 2:21 PM 3 comments: Links to this post 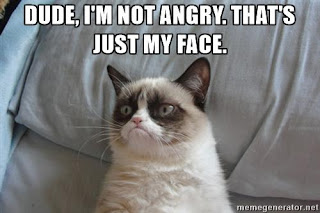 At least 40 million times twice a day Hubs asks me if I'm mad, and I have to remind him that no, and that's just my face. My Resting Bitch Face. I'm happy. Ecstatic, even. No, really.

So I'm always surprised, if I journey this Earth looking stuck up and unapproachable, why the Hell do so many people in stores approach me and ask,


I am careful not to wear my name/photo badge when I shop. So I can only guess my being mistaken for store employees is from the way I float around the store. I worked retail about four lifetimes ago, and you get an eye for certain things. I tend to swoop around, hitting all the clearance racks, and while I'm sorting through for sizes, I will refold scattered stacks of jeans, regroup the shirts on the rack by color, and will hand a cashier random things I find on the floor, like popped-off security tags sticking up like a tack waiting to go through the bottom of someone's foot.

I will always leave your store in nicer shape than I found it.

I often don't have anything in my hands because shopping is OFTEN not fruitful for me. Or I might be wandering back from the dressing room to put the clothes away that I just tried on, annoyed and depressed. But I never leave things in the dressing room and really don't like leaving them on a generic rack outside the dressing room. If I got it out, I'll put it away. Which, I suppose normal people don't do. So I am mistaken for an employee any time I'm out and about without ToddlerBandit right at my side, up my butt and demanding payment in chicken nuggets and french fries for his time.

Today, twice in one store.

Two women were hovering around a rack of clearance dresses that I was rehanging my failed sizing attempts at.

"We need dresses for a wedding and they have to be silver and we're having a hard time. Where do they keep their fancy dresses?"

"OOooohhhh, Yeah. So their formal stuff is generally on these two racks but there might be a few on the clearance rack here. And Macy's has some but they're kind of just prom dresses but they do have ONE rack where they keep things that are returns from other stores, it's in the clearance area too."

"I like this one but they don't have my size and also it needs to be silver."

"You should look online to see if they have that style in another size or color."

"I don't have internet."


"You can have them order it in the back, but this way you'll know what to ask for. And since you don't live in town, just have them ship it to your house."

"Oh sweetie, thank you so much!"

So I left them to make one swath through the men's department to see whether they had any clearance fancy suit britches or shirts that I can spend my Sunday night ironing for Mr. Fix (they didn't) and got stopped by an older gentleman.


I had noticed him just standing between two shelves of jeans. I thought he was waiting on someone else.


"Well, no. Not now anyway. I probably still know enough to help you though."

He was heading out of town on a work job and was utterly perplexed by the pre-shrunk or shrink-to fit sizing conversion and durability differences of Levi's 501s and needed help. This was something I could do in my sleep. I helped him get what he needed, let him know about Levi's quality guarantee and reminded him to keep his receipt and that he could probably take them back to the same store wherever he was heading if there was a problem.

"Gosh, thank you so much. I just so appreciate that. You've been such a big help. You say you used to work here?"

"Yeah, well it was a long time ago, but Levi's haven't changed."

"Well, you're sure nice to help me out. You have such a nice smile. I won't take up any more of your time, honey."

And then he gave me a card in case I need any construction or remodeling work done (when he gets back from his big out-of-town job, I guess).

And I left, empty handed (except for the business card). And when I get home the conversations will go more like this:

"Mom, do you know where my [fill in the blank here with anything from toothbrush to hockey stick to underwear to shoes] is? I can't find it."

"Mom? Are we out of [grocery item that is literally staring them in the face]?

DayLeeFix
Mommicus Wifeolarum Mediocretia. Not-so-secret book hoarder. Specializing in identification and removal of mysterious substances on all manner of household surfaces. President of the MOB Society. I write to get it all out because the alternative, farting, is out of the question. Last night I dreamed I peed alone.

The Tao of Blogging

E-version only: On sale now! Watch for updates.