In a big family it's hard to cram everyone's festivities within the allotted days on a standard calendar.  I was only issued 31 days for December this year, not sure about you.  As we inch closer to the big day within a brood that puts an importance on both old and new traditions, this year I have had a few moments to take pause to soak in some things that transcend time.

There exists a series of home movies that my husband converted for his mom and contains what I would call....priceless footage of he and his sisters and cousins doing what all children of the 80's did: using a giant video camera without parental supervision to entertain themselves for hours and in doing so preserving, like a time capsule: trendy outfits, questionable haircuts, and evidence of days gone by when they may not have gotten along as well as they do today.  They also display their tremendous performing arts abilities, choreography and lip-syncing skills across all genres, including music from artists such as:

With a groan and an eyeroll, the two youngest sisters who are the stars of the "Best Christmas Performance Ever" object but are overruled when the crowd requests that the DVD be crammed in the player for us all to laugh at to get us in the holiday mood.

So we see a younger version of the youngest sister, hair wild from over-teasing and following the instructions being given by the oldest sister running the camera, we watch as she headbangs on the bigscreen and aren't really at all surprised when her son, not yet in school, starts to shake his bonbon to the music he hears and it becomes apparent that he definitely gets his moves from his mother.

Yessssssss.  But later, in addition to Dolly "Walkin' In A Winter Wonderland" and after I wipe my tears of laughter away from the preteen girls screaming at their brother to "GET OUUUUUT!!!!" after walking through and ruining ANOTHER take, I notice something different in one of the clips.  One of the cousins is huddled in the corner with a smirk, just like a couple boys in the room with us today.  Our "boys" (18+), we know are giggling over something on one of their phone screens and we know it's probably not appropriate.  I ask what the cousin on the video is doing.  Jason laughs.

"Drawing dirty pictures with an Etch-a-Sketch."

New video footage was made this year, including some sledding action that was pretty awesome.  I look forward to the day that our kids will groan with embarrassment when we force them to let us watch them over and over again too.  I hope they're the good sports that my sister in laws are (really, you guys are good sports, and you're awesome, and I love you).  Sorry, rest of the world that's not our family, the old video series is not available on YouTube....yet.

My kids love getting gifts from Grandma more than Santa because they actually get what they want from Grandma.  Maybe because they don't ask Grandma for things like an iPhone5 or a laptop.  At any rate, it's a win-win situation and they love it.  Plus, there's nowhere else you can get an endless supply of sugar, exactly the present that you wanted, and each family walks away with a tetherball pole to say "Hey Chuck....I'm the only one in my neighborhood with my own personal tetherball pole, so suck it".

The grownups get very personalized gifts as well.  As the hubs and I sat next to each other and unwrapped our respective boxes and held up our treasures, he examined my purple sweater with the oversized jeweled button and proclaimed in his outside voice [which he insists is his inside voice and that I should just calm down], "That looks like a grandma sweater."  Then he promptly pulled teenager clothes out of his box.  Two hoodies and a puffy vest.  They each were exactly our clothing personalities, hilariously.  I think we need a stylist who can get us each a bit closer to the midline.  I dress like an old lady who sometimes wears yoga pants and he dresses like a teenager who sometimes has a job requiring a uniform.  We have to get our act together (but I'm keeping the sweater).

Overall such a fun time crammed into too short of a day, our family busting at the seams, and Grandma Bucky making doing it all look so easy.  We are so fortunate to have her willing to wrangle our herd and put up with the shenanigans that take place there....they won't admit it now but I know for a fact my children treasure the time and memories even more than they treasure the presents, and if you know my shorties, they treasure presents a lot.
Posted by DayLeeFix at 6:13 PM No comments:

Elf OFF the Shelf

My Facebook friends are annoyed with me this month the way that my husband gets annoyed with his friends in November.

Not the ones posting the pictures of the progress of their facial hair projects.  Those, I believe he's pretty jealous of.  He tried to put his big man-foot down over a long weekend trip we took for his buddy's surprise 40th, probably to honor that friend who makes it a practice to not shave whenever he's off the job...a "stick it to the man" gesture while we're on vacation together.  My guy didn't make it very long...but he made his point.  A couple days without a razor was good enough.  Also I told him either he could shave himself or I would do it for him in his sleep but that I could not guarantee that I wouldn't cut him...or take off an eyebrow.

The posts that annoy him (hilariously) are the 30 Days of Thankfulness.  All that positivity really puts him in a lather.  You'd think that my ball-and-chain bubble of negativity would counteract it and soothe him, but alas...no.

So I spare him the stroke and I keep what I'm thankful for to myself in November.  But really every day it's the same thing, and every year the people at dinner get sick of hearing about it.  I'm thankful that none of our lives worked out the way we thought they should.  If they did, almost NOBODY at our Thanksgiving table would be sitting there.

Cheers to screwed up plans!!

So this month my friends have been unwillingly subjected to a daily picture of the incredibly nerve wracking phenomenon that is: THE ELF ON THE SHELF.  Or, as ours is usually: The Elf OFF the Shelf.  His second appearance in as many years, he joins the ranks of other creepy minis out there terrorizing children and forcing them to behave.  Apparently the appropriate behavior for this guy is to just move each night from one location to another to be found by children in the morning.  Ours is a bit more....interactive. 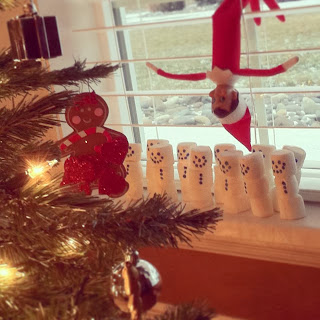 
So that's it for now, I'll update when the month is over if he sticks around but things are about to get busy and if you didn't notice, it was May when I posted about Fred's 2012 antics.  Anyone with an Elf should feel free to rip off any ideas they see anywhere on the interwebz or from their friends because, after all, lack of sleep that comes with being a parent of any shape or size sometimes zaps our creativity.  But I have found that the best reactions from my kids are to those things that are personalized to them, that make them feel that Fred dances closer each night to that blurry twilight line between their life and his, where dreams come true and where anything is most certainly possible.  The fact that there have been some adults along the way who have been pulled kicking and screaming into our Christmas Spirit-sprinkled fantasy land?  That's a plus.  Or they've blocked me.  My friends who have their own Elf?  Know that I love them, I love that you share, and I love knowing that your shorties *whom I also love* are going to remember this for a long, long time.
Posted by DayLeeFix at 12:31 PM No comments:

DayLeeFix
Mommicus Wifeolarum Mediocretia. Not-so-secret book hoarder. Specializing in identification and removal of mysterious substances on all manner of household surfaces. President of the MOB Society. I write to get it all out because the alternative, farting, is out of the question. Last night I dreamed I peed alone.

The Tao of Blogging

E-version only: On sale now! Watch for updates.